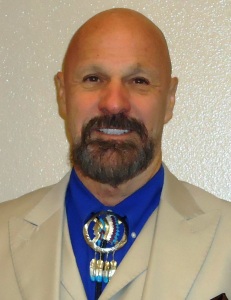 He is currently the Vice Chairman of the Mohave County Board of Supervisors, and also the current Vice Chair of the Lake Havasu City Metropolitan Planning Organization. Supervisor Johnson is the 1st and only Elected Official from Mohave County to have served as President of the Arizona Association of Counties (AACo). AACo represents all Elected County officials across the state, except for the Superior Court Judges, by serving as a liaison to the Arizona State Legislature, United States Congress, other governmental agencies, the media and the public.

Supervisor Johnson was one of a select group of 19 elected county leaders from across the U.S. to participate in the 8th Annual County Leadership Institute (CLI), a rigorous program developed by NACo and the Cambridge Leadership Associates.  It was a five-day Institute, held in Washington, D.C., that challenged the county officials to consider innovative approaches to address key issues facing their home county and residents.  Supervisor Johnson was recommended by state elected officials and then chosen from applicants nationwide by NACo to attend.

Supervisor Johnson is currently serving his 8th consecutive year as chairman of the Quadstate Local Government Authority which is a joint authority established between Arizona, California, Nevada, and Utah. The Authority was organized to provide a multi-state and county voice on federal natural resource management and public lands issues primarily in the Mojave Desert region. The Quadstate Coalition encompasses over 84,000 square miles in the Southwest.

Supervisor Johnson also Co-chairs the Arizona/Utah Economic Development Coalition. The coalition was established to engage the Interior Secretary and his employees in the coordination process required by the Federal Land Policy Management Act and the National Environmental Policy Act. As co-chair of the coalition, he has testified in Washington D.C. on the economic impact to Mohave County and the surrounding areas of allowing uranium mining near the Arizona Strip.

Throughout the years Supervisor Johnson has chaired numerous State and National committees. Among those are the Western Arizona Council of Governments Economic Development District (WACOG) where he served as the first President of the organization. He currently chairs Mohave County’s LOCAL Public Safety Retirement Pension Board. Supervisor Johnson was also the founding member and past Chairman and Vice Chairman of the Colorado River Sewer Coalition which is an organization of diverse membership from California, Nevada, Arizona and Mexico formed to address water quality issues of the lower Colorado River. Supervisor Johnson has been appointed to state committees on property assessments and property tax appeals. Both of which met to analyze issues involving the property tax appeals process and to submit legislative recommendations to the President of the Senate and the Speaker of the House of Representatives. Supervisor Johnson is also Vice Chairman of NACo’s Information Technology Standing Committee, a member of NACO’s Public Lands Steering Committee, and a past member of NACo’s ELLU & Economic Development committee.

Supervisor Johnson has also been involved in many County organizations and committees.  He is past chairman of the Mohave County Republican Central Committee, former President for six years of the local International Footprint Association Chapter 75 which is a law enforcement support group; and also past Grand President of International Footprint Association.  He has sat on the RUDAT committee for Lake Havasu City as well as Lake Havasu City’s “Vision” Planning Committee.  Supervisor Johnson is also the Past President of the Mohave County Municipal Property Corporation and former Vice Chairman of the Workforce Investment Act Board in Mohave and LaPaz Counties.

Throughout the years Supervisor Johnson has been involved in numerous causes.  One of which is the fight to protect the women and children of Colorado City for over fourteen years.  He has brought national attention to the issue of Polygamy happening in the state and surrounding areas.  Supervisor Johnson has opposed any legislation in favor of polygamist acts by testifying in Phoenix on the abuse.  He traveled to Texas to give his expert opinion on the FLDS church and polygamy.  He has also appeared in many documentaries on the topic.  Supervisor Johnson has assisted in the rescue of families from Colorado City, prosecution of offenders and has assisted in relief efforts to help those that have escaped.

Supervisor Johnson was the only elected official from Mohave County to recognize the dangerous of dumping effluent waste water into Lake Mead.  He has testified and has been asked to testify in DC regarding public land issues and cyber security.   He opposed the Citizens Utility rate hike and more recently opposed and testified against Unisource’s proposed demand charges and rate increase.  Johnson also has opposed and testified against the US Fish and Wildlife’s closure of Colorado River water in the Havasu Refuge jurisdiction.  Supervisor Johnson brought in one of the finest public libraries and senior centers in the state to Lake Havasu City.  He also worked to remodel the senior center in Golden Shores.  Throughout Johnson’s term as Supervisor he has been instrumental in bringing in hundreds of millions of dollars in new industry to Mohave County along with thousands of local jobs.  He has also supported tourism in the area by bringing in hydroplane racing and a free air show to Mohave County.